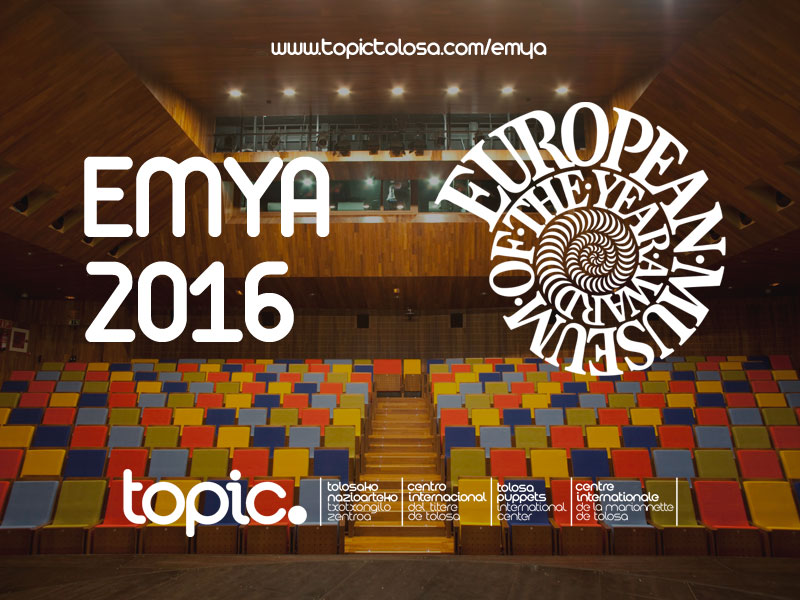 Your host for EMYA 2016 is TOPIC, Tolosa’s International Puppet Center (www.topictolosa.com; Siletto prize winner in 2012), where the main programme for EMYA 2016 will take place, and during the course of 4 days, historic sights and museums of the village of Tolosa and other villages and cities like San Sebastian (San Telmo Museum and Basque Culinary Center), Getaria (Balenciaga Museum) and Gernika (Basque Museum) will open their doors to EMYA participants. Visits to the Guggenheim in Bilbao (EMYA award winning museum in 2000) or Geopark of Zumaia will feature as optional tours on the itinerary.

Our host village Tolosa (www.tolosaldea.eus) is well known for its Carnival, as a gastronomic destination and for its spirited and full of initiative people. It was the former capital of Gipuzkoa (www.gipuzkoaturismo.net), a landmark in its territory, which in barely 2000 square metres, a little more than a city like London, manages to hold a cosmopolitan capital such as Donostia-San Sebastian, a traditional culture and the oldest language in Europe (Basque language), 86 km of versatile coastline and a lush green, maze-like countryside. Gipuzkoa is one of the three regions in the Basque Country (http://turismoa.euskadi.eus/eu), a small country with a large identity.

Donostia-San Sebastian will also be European Capital of Culture 2016 and it has been pointed out as one of the world’s 20 best destinations to travel to in 2016 according by the Unites States most prestigious travel guide.